Following my talk at RacketCon 2014 a few participants expressed interest in getting a quilt based on the Racket programming language logo (right).

Since I used Racket extensively both in inventing and developing YouPatch (www.youpatch.com) I thought it would be a nice gesture to make a free quilt design available to members of the Racket community.

However, just running the Racket logo through the YouPatch process (as it stood) made for an unsatisfactory result on two fronts:


So I improved the aggregating algorithm, achieving typically a reduction of 20% in the total number of pieces. [There's a trade-off here against the number of distinct shapes involved. I could get 30%, but we decided to restrict shape dimensions to reduce confusion during construction.]

And I added an option to take a pixelated design and automatically and selectively add half-square triangles to reduce the "stair-casing" effect.

Without the schematics, here's the triangle design in all it's glory:

Racketeers, if you'd like this design free-of-charge, let me know and I'll generate and send you the pdf with all the instructions. You'll still need to buy the fabric and find a friendly quilter. [Try your local modern quilt guild if you don't know one.]

Let me know what size you'd like:
Now, in case you prefer another programming language to Racket, here's a sample of what happens to the logos of some other awesome languages that also have a liking for the greek letter lambda (λ):

At the time of writing the triangle-generating technology has not been built into YouPatch's self-serve features, nor have we finalized pricing.

I think you can see that this facility makes a big difference to logo-style pixelation (simple design, few colors, low-ish resolution), and of course it can be used for non-programming language logos! ;-)

The Racket logo is available for free, and we'll be making a triangle option available in 2015 as part of YouPatch, but the technology exists to do it now, so get in touch if you're keen!
Posted by Daniel Prager at 5:58 PM

Email ThisBlogThis!Share to TwitterShare to FacebookShare to Pinterest
Labels: youpatch 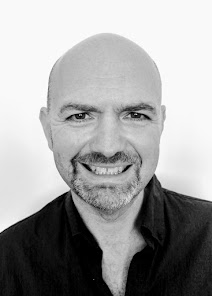 About me: Daniel Prager

See pragerslaw.com for my insights into sustaining and scaling improvement.